This is the story of how I died.

Ok, maybe not. Maybe I just wanted a little Doctor Who reference. This is the story of how I almost died? It doesn’t have the same ring to it. And it’s still blatant hyperbole. 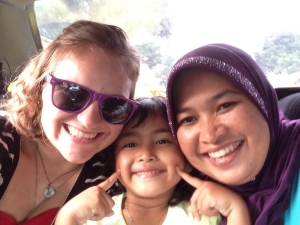 Bu Dewi and her adorable daughter!

Anyhow. I left site what seems like a million years ago. Indonesia is famous (infamous…?) for its “rubber time” or “flexible time” or “no such thing as time” attitude. For a recovering Stage Manager this can be a bit, well, trying. It is, however, a great exercise in patience and learning to be a little less of a hardass. My plans for leaving site were, therefore,  flexible and fluid. When one of my best friends at site (the awesome music teacher, Bu Dewi) asked if I wanted to accompany her to Bandung to visit with her family for the holiday Eid al-Adha I embraced my new found sense of ‘go-with-the-flow’ and accepted her kind invitation. I was already planning to head up to Bandung later in the week and I love her and her family so I was more than happy to push up my departure from Wednesday to Sunday. 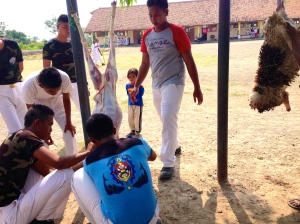 Mid skinning a goat with a sheep up next.

So. Eid al-Adha is a Muslim holiday during which a goat, cow, or other livestock is sacrificed in a town square or public location. It is meant to represent the willingness of Abraham to sacrifice his only son. From there the skinning, butchering, and distribution of the meat varies. In line with most things about this amazing culture, it’s a very inclusive and giving tradition. (Don’t be a judger-bunny. We kill animals too, we’re generally just too squeamish to do it for a good reason or in public.) Some people give a great deal of the meat away to those in need, others share with all their friends and family. Once you get past the blood it’s really a lovely holiday. I actually missed most of the local slaughters since we were shopping and driving around most of the time I was with her family. It wasn’t until I got to Matt’s site in Gebang that I saw them skinning a goat up close and personal.

I started in Bandung (see number 1 below) and spent a few days with Bu Dewi’s adorable family. From my village to Bandung is about a 7 hour drive. A few days later, I hopped a train to Cirebon (see number two) (the closest large town near Matt and Brie) which took me another 4-5 hours. I spent a day with Brie and toured around Matt’s site and then we all headed to Semarang (see number three) on a bus together to grab a ferry to paradise.

I’m talking about a looooota places. Here’s a play by play!

But this is Indonesia in the Peace Corps. Nothing is ever that simple. We hadn’t been on the bus for more than an hour when Brie got a text message from the man who runs the ferries out of Semerang saying that the waves were too high and that the ferries were, therefore, cancelled until further notice. The three of us spent a few moments in utter despair until we collectively realized we would not be defeated so easily. With Brie’s master skills of travel and planning, Matt’s incessantly positive attitude, and my language we called everyone and their mother about getting transport to Karimunjawa. We were pushing the latter half of the afternoon and the people with whom we needed to speak were slowly packing up for the day and turning off their phones. In order to get to Karimunjawa you have two options for ports, Semerang or Jepara. We decided we would meet up with T (our friend headed in from East Java) in Semerang as planned, pick up Alex (our other friend headed in from the West) at 4a and then immediately head to Jepara, a town an hour or more east of Semerang (see number 4). 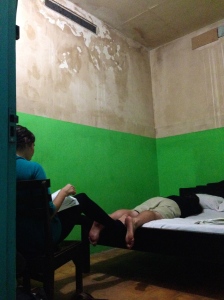 Look at that 5 star hotel!

In true Peace Corps/backpacking style, we found the cheapest and scariest motel to rest our bags. I say bags because we, being the brilliant and invincible young people we are, decided to stay up all night playing cards, eating, and enjoying general merriment. We figured if Alex was getting in at 4a what was the point of sleeping anyhow? Not to mention we were fairly certain our motel doubled as either a brothel or a place for axe murderers.

After what should have been an expected delay of Alex’s train of nearly an hour and a half (rubber time) we found a mini-bus to take us to Jepara. We would later look back on this bus ride as one of the worst since coming to Indonesia. I say one of the worst because, as we would later confirm, it can always get worse. It was hot, over-crowded, bumpy, and we all had too much luggage with zero sleep. After our fantastic ride we were deposited in the middle of nowhere Jepara. We had very few plans or ideas of what we were doing next. The main plan had been to get there; we hadn’t gotten much farther than that. The first order of business was to find a local homestay that had room for us for one night. We found a lovely house with a nice family willing to give us an air-conditioned room with two mattresses. When I say a room with two mattresses I should probably specify that there was enough room for two mattresses. On the floor. And nothing else. There was a small ledge near the far wall for a few bags and then the space for the door to open (which also led to the tiny mandi). 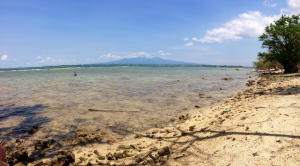 Coral is quite painful. In case you were wondering.

After getting situated in our new digs, we decided to hunt down the ferry office and beg for tickets. Beg we did. Or, beg Brie and Matt did. To no avail. They came back empty handed and with heavy hearts. We wondered aimlessly for a bit until Brie, the master of travel, busted out her Lonely Planet – Indonesia and found us a nearby island to play on. We headed to Pulau Pendek (I believe that was the name. It means Short Island) to get our beach on. We walked around the entire island looking for the white sandy beaches promised in Brie’s Lonely Planet only to find tiny swaths of water covered in coral. In addition to a moderate amount of disappointment due to the surroundings, the man with the boat said our time there had to be brief because he was worried about the waves. It was at about this point I wanted to raise my fist to the sky and damn Poseidon in all of his stormy, angry glory. But I definitely did not. If the Odyssey has taught me nothing else, it’s taught me to keep my mouth shut with that guy.

After we returned from our small journey and ate dinner at a local warung, (Vocab: a small eatery) we parked ourselves on the harbor to watch the sun set. It was about this time a small miracle happened. Along came a group of European tourists Matt and Brie had met whilst begging for tickets that very morning. Their Indonesian friend let us know that he had managed to get 1 extra ticket on the normal ferry leaving the next day as well as enough seats for all of us on a local fisherman’s boat leaving the next morning at 6a. We passed on the ticket for the ferry in favor of all of us traveling together on the fisherman’s boat. We had all but given up, with conversations of splitting the group to go to Solo, or to stay in Jepara, or to continue on to Surabaya when along came this wonderful man with his miraculous gifts.

With a renewed sense of vigor and glee, we headed back to our homestay, played some cards, and then piled all five of us into our tiny, two mattress room where we woke at random intervals, as excited as children before Christmas. 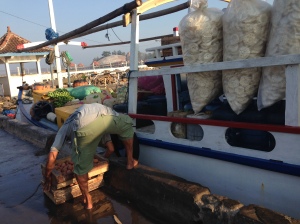 Eggs and Kripik and Goats, Oh my!

Then there was the boat ride. Mom, you may want to go ahead and skip to the next entry. We had a hasty breakfast of Pop Mie (Indonesian Cup-a-Noodles) and walked over to the dock where we met our ship to find them still piling on all of the supplies. It was a regularly scheduled trip for our fisherman friend to Karimunjawa to bring a boat packed full of everything from boxes of dried food to two live goats. We found two of our European pals and our miraculous Indonesian friend on the dock. After much waiting (remember, rubber time) we piled on to the boat and began our voyage.

Over the next hour or so we began to push things aside in order to make enough room for all of us. They cleared off the top of the cabin and covered it with a tarp so that four or five of us could sit up there. I have never been on a boat for this long and certainly never this far from shore. I looked out at one point, maybe three hours into the trip, only to find there was no land to be seen anywhere. There was nothing but pristine water in all directions. Some of you may know this is a huge bucket list item I just accomplished.

Now, before I continue I’d like to introduce you all to a short poem by one of my favorite poets, Ms. Emily Dickinson. 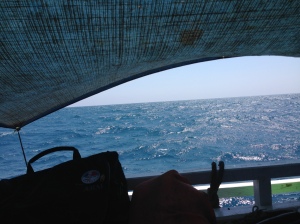 Nothing but ocean as far as the eye can see…

For each ecstatic instant
We must an anguish pay
In keen and quivering ratio
To the ecstasy.

For each beloved hour
Sharp pittances of years,
Bitter contested farthings
And coffers heaped with tears.

This is maybe a little darker and harsher than my intent, but it sets it up nicely. We worked so hard to get to this island. We planned and the plans failed. We nearly gave up. We sweat, almost cried, we travelled all over the place. And then we got onto this boat.

I want to take this time to remind you that the regular ferry refused to go because the waves were too high. This may have been a wise decision on their part. Somewhere in the middle of the 8 hour journey we were all convinced we were never going to make it home alive. The waves started to really pick up but it wasn’t until one particularly intense wave when we realized how serious this was. Matt was leaning back, stretching his arms behind him, when suddenly they were in the water. Those of us on top of the cabin braced ourselves on the small railing and the captain ordered us all to the right hand side of the boat (port? stern?) in order to counteract the sway of the waves. As Matt later told me, it was when the woman who had lived on Karimunjawa her whole life started crying that he knew this was no normal trip.

Will they survive the trip? What happened to the boat! Did the goats make it out alive?? Tune in next week (or sooner) for the next installment of A Vacation Worth Fighting For! 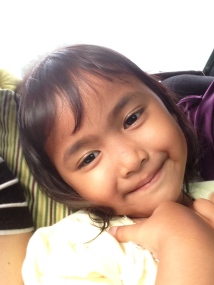 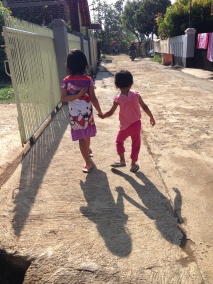 Bu Dewi’s daughter and niece on an adorable walk 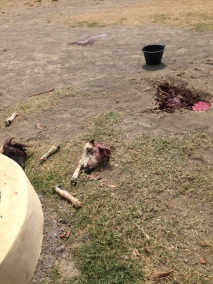 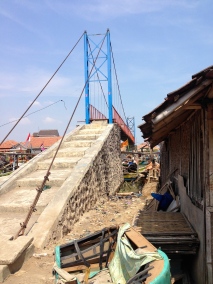 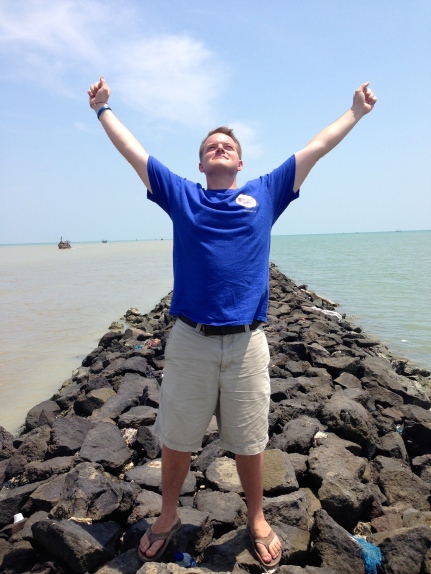 Matty’s King of the World pose on a jetty. 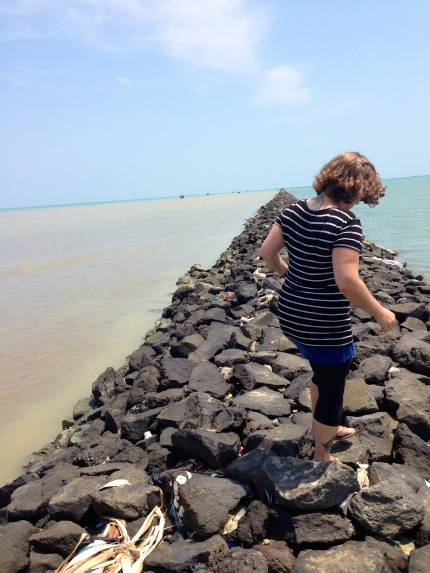 Just climbing on a jetty. 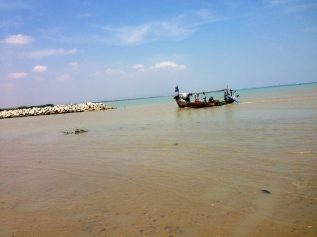 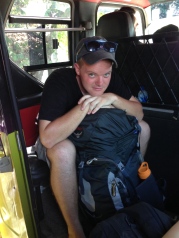 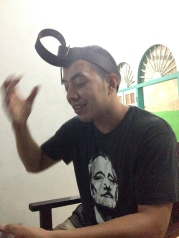 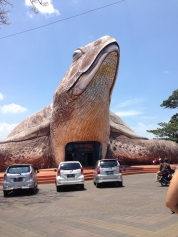 3 thoughts on “A Vacation Worth Fighting For, Part One”