I swear in as an official Peace Corps Volunteer in under 10 days. I leave for my permanent site in about as many. I leave my soft, sweet little bubble of friends and rambunctious bule (white folks).

All the folks at Coban Rondo

Preparing to come to the Peace Corps is vaguely akin to a sick joke, full of dramatic irony. Everyone watching from the other side knows that no matter how much you try, you’ll never prepare enough or in the right way. You’ll never be able to pack the right things or spend enough time with the right people or say goodbye in the right way. You’ll never be prepared for a new climate and new people and a new language. You’ll try because, well, what other choice do you really have. You have to try. Try I did. I prepared myself for the heat as best I knew how. I packed what I thought would be appropriate. I spent as much time as I could with the people I love. I said goodbye in the only way I knew how. I mentally and emotionally amped up my steely resolve to be completely alone for a long time. Maybe not two years, but at least until I learned the language and made friends in my excessively slow fashion. And then PST happened.

Let’s all just take a moment to chuckle at me about this one. I had prepared myself to be alone for an undetermined amount of time and then I was thrown into the mix with 49 other like-minded, insane individuals. You know that person in your group of friends, that one person who’s a little off in some way? Maybe a little kooky or idealistic. Maybe they are brilliant in a way you don’t expect or awkward in a way that’s endearing. It’s just one person you can’t quite place in one box and you love them all the more for it. Imagine being that kind of person your whole life; now imagine being thrown into a room full of 49 other people just like that. It’s freaking magical.

Eat the cracker with no hands!!

Next week we say goodbye. Again. We try to get ready for the unknown again. There’s not even anyone on the other side to giggle at our futile efforts. Our sites are all individual and new. Those 20 of us going to West Java are in for a whole new level of what-the-hell. There are only three Peace Corps Volunteers that have been there before us, all of whom moved there after living in East Java for two years. So, we prepare again. We put all of our belongings back into bags and firm up for a teary goodbye and get on a train.

Until then we are spending as much time together as possible. My host family is in a perpetual state of dismay and concern over my whereabouts. Both because I come home at ungodly hours (7pm and 8pm!) and because I can’t seem to stop falling. I blame the rain, mainly, but we all know it’s also just a trait I possess. We have been back to Coban Rondo for a fun picnic with the entire trainee population which was promptly rained out after playing traditional Indonesian Independence Day games. We head to McDonald’s and Pizza Hut while we still can, we grab a beer on the roof when we’re feeling overwhelmed and have a dance party. I’ve already booked my plane ticket to Bali for late September when we are allowed travel. I’ll be vacationing with a large group of fellow volunteers and we plan to recline on beautiful sandy white beaches with crystal clear water and adorable bungalows. I can get through absolutely anything with that picture in my mind.

We decided this will be Courtney when she grows up. 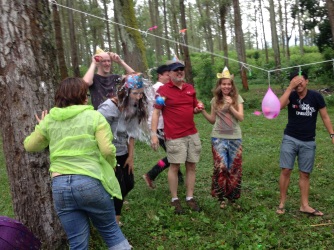 Pop the balloon with your hat to win the game! 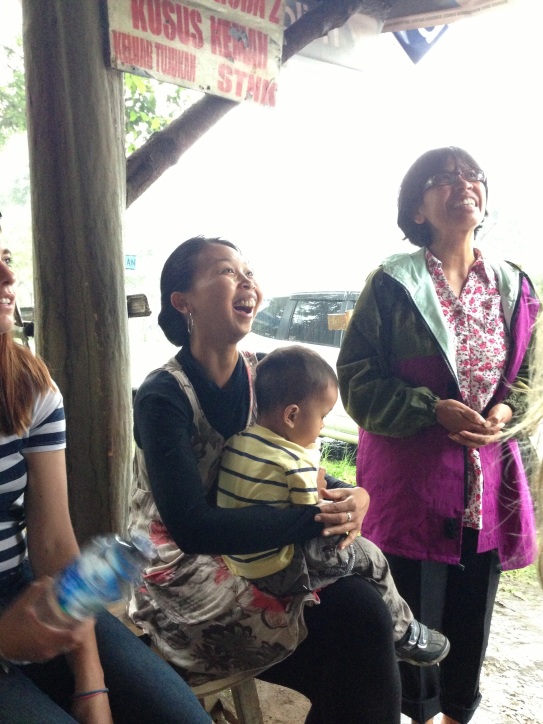 One of our managers, Puji, her little boy and our head language teacher, Ning. 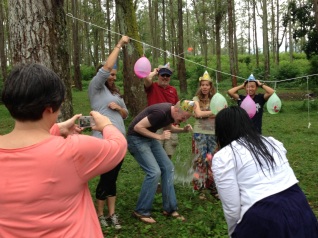 Dan accomplished the balloon pop too! 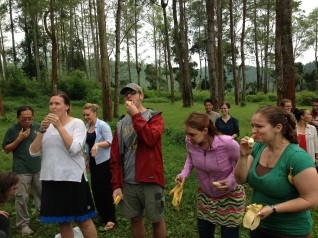 Holy moley, we had to eat two bananas as fast as possible. NOT FUN.

A little pre game warm up. 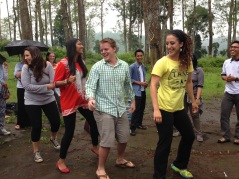 Teaching us the wobble!

We’re teaching teachers how to teach…eek. 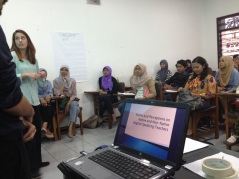