It happened. I am officially a Peace Corps Volunteer. I took an oath in front of the US Ambassador and shook his hand as he gave me a pin to prove I said the words of all federal employees.

Check out our KILLER PC Pins. And those faces.

We met, we smiled, we sang the Indonesian national anthem, we shook hands and took pictures, some of us are in the papers, we hugged and said goodbye, and that was that. Like most ceremonies. Some of us went out afterward for an adult beverage which was nice but I had to get home to pack and spend my last night with host family numero uno. Now, they are something I did not account for. They are overwhelming with affection and kindness and caring. I couldn’t cough without someone asking how I was and I couldn’t be on the phone without someone wanting to say hi. It was suffocating. And I miss them. I did not expect to nearly cry as I left their house for the last time. As I high fived Miss Noreen for the last time. I know these are things that should have occurred to me, but they didn’t. So, I miss them. They were good and patient and kind. I do hope to visit them if given the opportunity to help with training next year. Even if the mandi water is freezing.

A last photo with Ibu, Nenek, Sam (the PCV who lived with this family last year), and some of us ID-7s.

After a prolonged goodbye, we got on a train Tuesday at around Noon. 16 hours later we arrived in Bandung. Lemme say that again. SIXTEEN hours. On a train. I would really love never to do that again. Somehow I think that’s not a very likely hope, but a girl can dream. It was fun, though. All 20 of us were seated together so we, of course, played train mafia and other fun and ridiculous games. We got to Bandung at around 4a and everyone shuffled out in a dazed and exhausted stupor akin to a bad zombie movie whilst carrying all of our wordly possessions. We crossed the street and promptly passed out in our hotel. We were lovingly awoken at 11a to come down and meet our principals/vice principals/counter parts/whoever decided to show up from our school. You heard me right, folks. We traveled 16 hours, didn’t really sleep, and then got dressed up to meet our future employers. Woot. We were thrilled.

Luckily for me, my counterpart (Pak Dayat) is one of the nicest people on the planet. He is so excited to have me here and he made that very clear. Publicly. We had three wonderful nights in the hotel with warm showers and a wealth of restaurants nearby. We found Indian Food and Pizza Hut. It was a cultural oasis. The few of us who needed to stay a third night had a grand time having a girls’ night. We did facials while some of us got a massage and we watched a chick flick whilst doing our nails. It certainly wasn’t an accurate depiction of what life would be like at site but it was a lovely way to celebrate our last night in a city.

Alan, the only man to be invited to girls’ night.

Alan (the only male in girls’ night) and I are neighbors. I mean, for the Peace Corps, you can’t get much closer than he and I are. It’s apparently about 30 minutes to an hour by bike. Because of this fun little fact we were able to hitch a ride together to site as his Vice Principle and my Counterpart had ridden together. So, we buckled up (figuratively, not literally, as there were no seat belts in the back seat) and settled in for our 6 (ish?) hour ride to site.

It was really quite beautiful. We passed countless rice patties littered with farmers and palm trees. Alan dubbed one particularly green expanse The Shire of Indonesia. As we were passing through the windy roads of Gunung Gelap (Dark Mountain) we drove into clouds and I thought I was home again. With the exception of a few odd trees I could have been on Hwy 17 going to Santa Cruz.

I swear, we drove into a cloud.

We arrived at my house first. I was reminded of a time that seems both years ago and yesterday. I thought about when I was delivered to my family in Batu. I couldn’t speak a word of real Indonesian, I was nearly quivering like a leaf, there were tons of people there to receive me. I wasn’t quaking this time and I can speak quite a bit of Indonesian now. My Ibu was out when I arrived with no one in the house but her family that had been visiting from Bandung. It was a peculiar way to arrive, but no matter. I found my room, explored the house, and settled in to unpack. There are some major stores nearby as well as a little collection of local shops. My house is very quiet and there’s a well in the back that looks like a small child covered in black hair may crawl out at any moment. I am making a ton of friends with local children and teachers. My school seems really fantastic if somewhat huge. My desa is darling and the beach is beautiful and close. When I buy a bike I should be able to get there fairly quickly.

The boys and I enjoying the beach at sunset.

It’s amazing how much you really get used to given enough time and resilience. When I first came to Indonesia I was constantly worried about the heat and the squatty potty and the mandis. Now it’s just the heat; the other two are a normal daily occurrence. There is always a measure of resolve you don’t know you have until you’re in the middle of using it, some measure of resilience you didn’t know you had until you refuse to stumble. There are, of course, new challenges in a new village. New sources of excitement, new people, new family, new language, new life. I told my mother something once that she recently quoted back to me (god, I hate having myself quoted at myself): It takes you 6 months to stop feeling uncomfortable in a new place and a year to be comfortable. Alright, so maybe she didn’t remember the exact quote but I’ll give her props for trying. Trust me on that, though. I’ve moved a lot. In a month I will know people and feel a little more secure. Two, and I’ll have a friend or two. Six, I’ll feel like I’ve been here forever. At one year I’ll be able to shake things up. It’s a process; it’s slow and it can be tedious, but it’s necessary. It’s why I’m here for two years and not on some 6 month program. I want to really help. Lasting, effective, sustainable change. So buckle down, saddle up, batten down the hatches, and any other silly clichés you can think of, because we’re in for quite a ride.

Me and Court giving some angry faces. 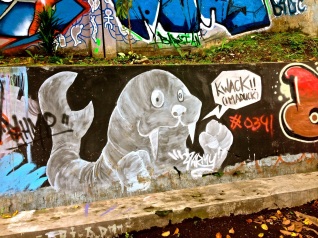 I. Love. This. Graffitti.

Court and Sonya lost it mid way through the train ride. 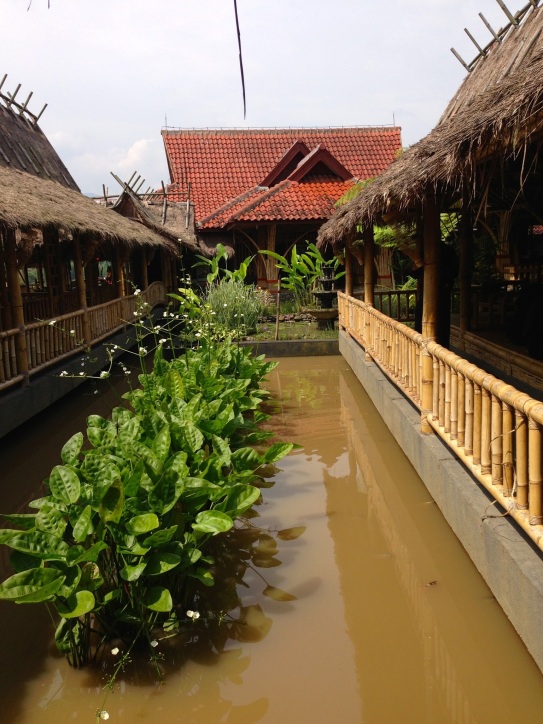 So much love in this photo.

Aubrey and I are pretending the be sweet.

The gorgeous view from atop a mountain.

I’ve got a golden tiiiiiicket.

Tossing up our signs at night with Bandung in the background. Like a BAWS. 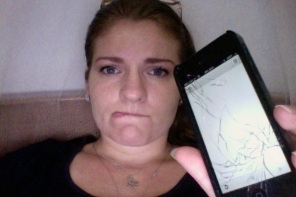 I broke my phone, ya’ll. I almost cried. Gotta work on finding someone who can fix it or getting the pieces shipped out here so I can fix it.

Matt and Aji reclining on the train, getting ready for our long journey.